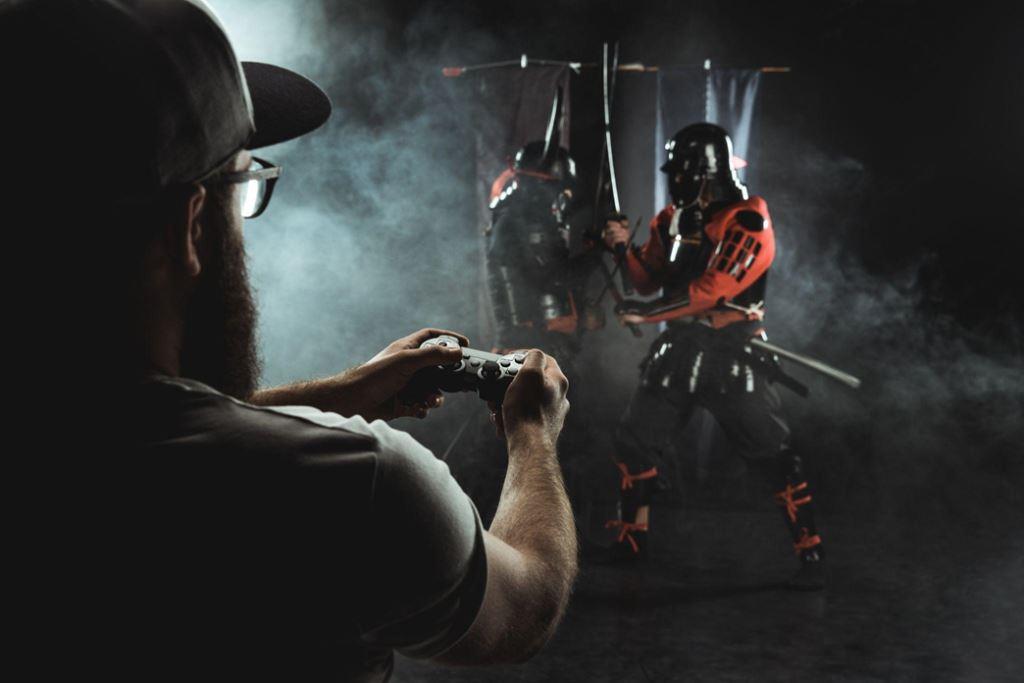 We are going to talk about How AI and data are the bull of the gaming sector. Let’s start with how Game Development and AI solution has evolved over the decades, and then we will discuss how AI shaped gaming.

When we take a look at the evolution of gaming, gaming has evolved over the years with as early as the 1950s chess and checkers written on a computer program gave the opponents a run for their money So, when we say non-player characters, we mean a character that is not under the control of the user or player who is playing the game, so all the other components of the game that are not under the control of the gamer are non-player or non-playing characters.

So, with the emergence of artificial intelligence in the gaming industry, developers made use of stored patterns that were used to determine the actions of a non-player character.

Use of artificial intelligence in the gaming industry

If we take the example of a fighting game with artificial intelligence, the opponent is much more advanced and performs according to the behaviour of the user. Or you know, the game player and other non-playing characters are made much more precise with their look and feel by using advanced hardware and making use of artificial intelligence  concepts like augmented reality and virtual reality.

Even though the main objective is a user experience and has been the same over the decades. Gaming has also achieved its goal and has helped many applications fall into a wider spectrum other than gaming. It has provided an environment for the research and development of applications such as Watson, which is an IBM computer that can answer questions.

They’ve become much more intelligent with artificial intelligence, and they’re able to give responses based on a user’s behaviour, which has created a lot of user engagement possibilities with video games.

Nowadays, take a look at a video game in the early 90s or the late 2000s. There’ll be a drastic change in how the gameplay has changed altogether when it comes to the opponent as a computer. So, when we take the opponent from the computer, it is quite difficult to defeat the opponent if it’s an AI because they have trained on data based on patterns. So, you have to identify, or you know, you have to better than the pattern that was used to train the component.

How artificial intelligence is used in gaming.

The AI in games is the brain in the game. Artificial intelligence algorithms are primarily used to generate responses based on user inputs. The question here is why not use a set of responses for each user or every user. There has to be a set of responses that we’ll use. The answer to this is the uniqueness of the human psyche.

Now we know that each user is a different human being and they respond to situations differently. So, the AI bot or the AI solutions in our game will make an intelligent response based on the set of inputs that a user provides.

Let’s say you have a fighting game, so based on what kind of moves the player is giving input, and based on the difficulty level that we choose, we choose the component or the non-playing component, which is also a fighting player in the game, will respond to the inputs. So that is how AI works in gaming. If you are kicking, the intelligent response would be to block the move.

It has become much more intelligent, and by “bots,” we mean the non-player characters in games, who appear to be becoming more advanced in terms of intelligence.

Even though we can set the difficulty level, differentiate and anticipate each response according to the user input. It has become much more advanced and engaging, of course, and now to say more on this.

Let’s try to understand this from the game perspective. If you are playing a football match on a gaming console, now you’re playing with the computer, so with each pass that you’re making, the board is also anticipating the pattern in your gameplay and they’re trying to figure out how to get the ball from you and score a goal eventually. So that’s how intelligent AI has become in gaming.

The bots are becoming much more intelligent and the future aspect looks great as well.

Now talking about the next way AI has shaped gaming is through artificial intelligence concepts like augmented reality and virtual reality, which have increased the quality of user experience in terms of interacting with the gaming interface.

The look and feel of the non-playing characters in a seemingly advanced environment have been a successful move for the gaming industry. It also gives an edge to the gaming experience and also announces the arrival of the next-level gaming experience. So when you take a look at the hardware that we have for gaming right now, these augmented reality and virtual reality consoles that we have been providing you with the next-level gaming experience, which is something that has added a lot of value to how games are built and how they’re made right now.

So that is one thing that is kept in mind. Will they be able to, you know, simulate it on an augmented reality platform or a virtual id platform because it helps in the increased quality of user experience and that is what the developers aim for.

The next thing that artificial intelligence helps with is gaming. It has been a constant source of potential to understand. The psychological aspect of how an AI bot will react to a user and vice versa, and the data collected from the user interactions with the AI is a ground-breaking opportunity to understand how humans react to or interact with machines. So, based on how a person is interacting with the machine under circumstances that are laid out by the game, that data is telling us how our human brain works in different simulations in different conditions, and similarly to the machines also.

If we have an AI over there, we will know for sure how the AI is reacting to whatever the user is giving the input, as it is also a phenomenon, which is known as emergent gameplay. It just circles, creating a set of complex systems, and it gives you an image and gameplay where the outcome is decided by the user engagement.

You must have known about the role of AI in the gaming industry, but it all starts with a basic that is gaming development. When games are developed by professional developers, they are tested, then AI is used in them from the user’s perspective. Only then comes the real life experience in the game.

In Short is said to be the present era of gaming and animation, in which AI is like a boon for them.